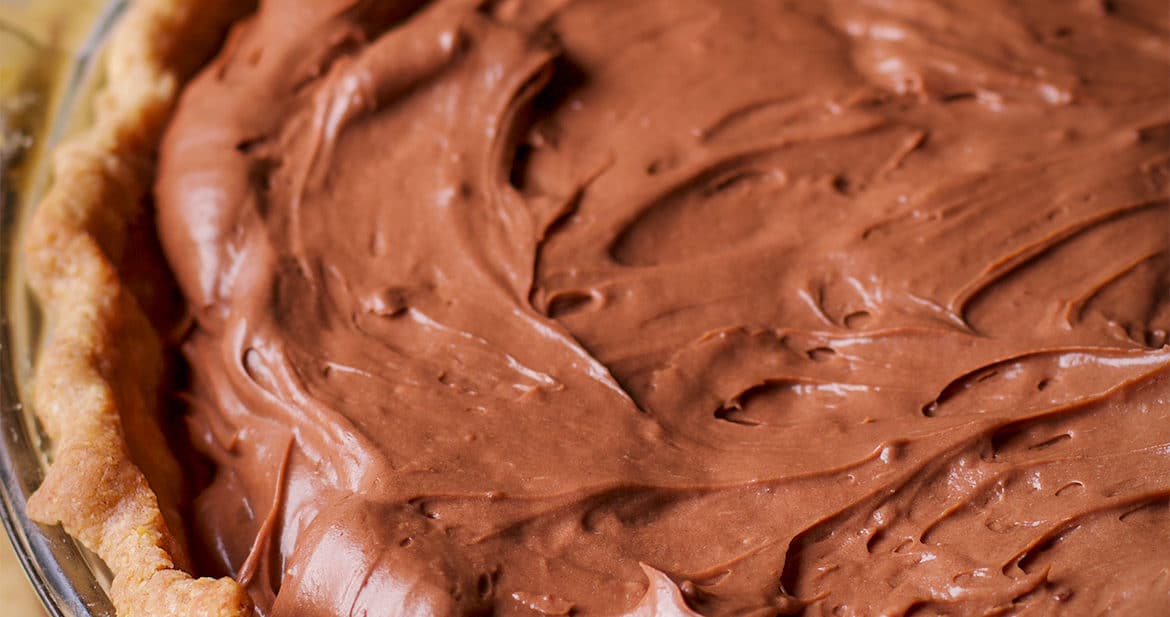 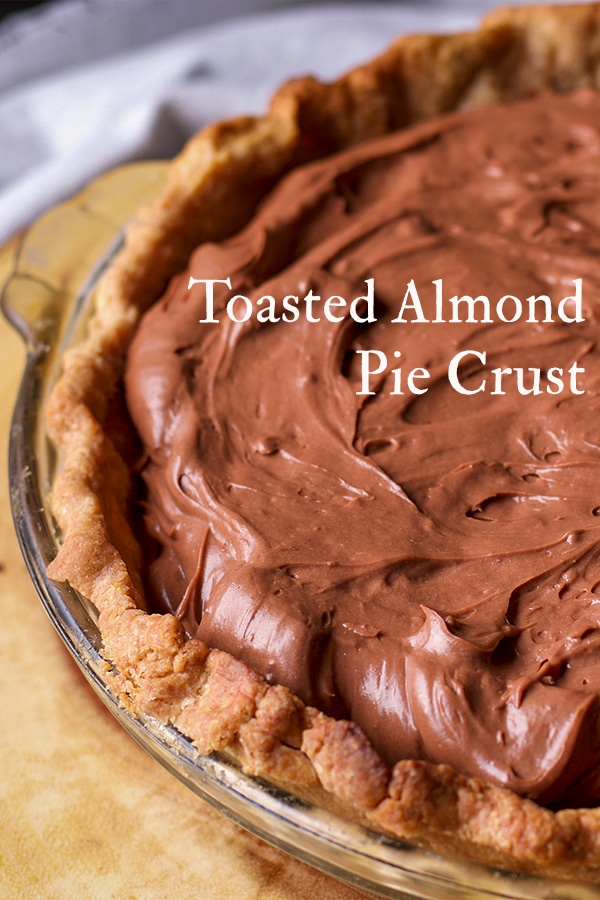 For the past couple of decades, I’ve been happily devoted to one pie crust recipe – Foolproof Pie Crust. It’s one of those no-fail recipes that always turns out exactly as it should – flaky, tender, flavorful, and delicious.

Even though Foolproof Pie Crust will always be my go-to recipe, this Toasted Almond Pie Crust is my new favorite recipe for cream pies, especially Chocolate Cream Pie. The contrast between the warm, nutty flavor and super crispy texture of this crust and the ultra rich and creamy chocolate filling is to die for.

As much as I love pairing the toasted almond flavor with chocolate, this crust is the perfect choice for pretty much any cream pie. The combination of butter and toasted almond flour creates a crust that is flaky, tender, and crisp – almost like a crisp butter cookie.

#1. Work the Dough with your Hands

There are a lot of ways to mix up pie crust dough, from a simple hand held pastry cutter and wooden spoon to using a food processor. In the end, I prefer to just use my hands. Using your fingers to rub the butter into the flour gives you more control over ensuring that all of the flour is coated with butter and some small chunks of butter are left in the dough. This is important for a couple of reasons…

Coating flour with fat helps to inhibit gluten development. A strong gluten structure is great for bread, where you want a sturdy, chewy texture.  But, it’s terrible for things like pie crust, where you want a tender, flaky texture. Fat interferes with the development of gluten by coating the proteins that are responsible for gluten formation.

By rubbing the flour and butter together in your hands, you’ll help ensure that all those granules of flour are well coated in butter. A food processor will accomplish the same thing. However, using a food processor to incorporate the butter usually breaks up the butter into very tiny pieces. Leaving a few pea size chunks of butter in the dough will result in the flakiest texture. 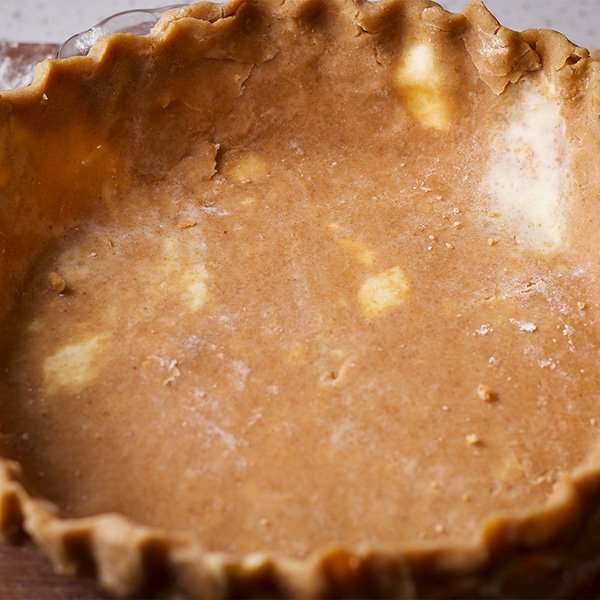 The word thing you can do for all-butter pie crust is let the butter get too warm. If the butter goes into the dough warm, or gets too warm while you’re mixing the dough and rolling it out, it will “melt” into the flour, distributing it too evenly throughout the dough. This will result in a pie crust that is tough and dense rather than light and flaky. You want the butter to coat the flour, but still remain in tiny little pieces.

In things like cakes, cookies, and muffins, using room temperature butter is essential because you want it to fully incorporate, emulsifying with the other ingredients. In pie crust, you want it to retain much of its individual integrity.

To keep everything nice and cold, use cold butter to make the dough, chill the dough before you roll it out, and then freeze the dough for 30 minutes after rolling it out and fitting it into a pie plate. Bake the crust directly from the freezer in a preheated oven. 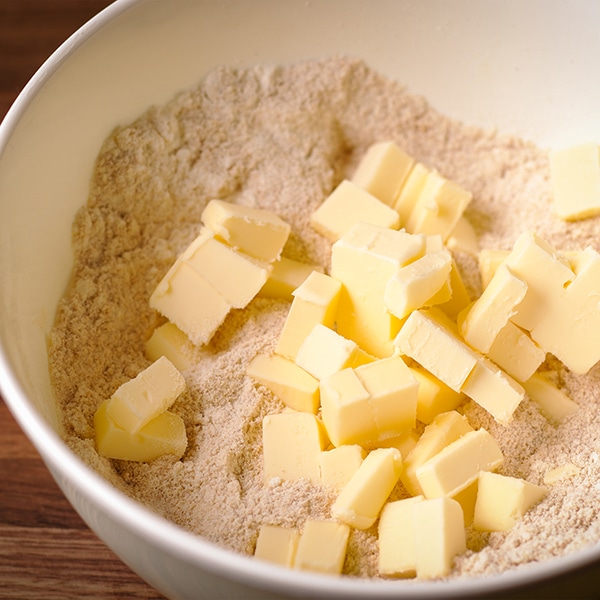 Can you freeze this pie crust dough?

Yes! The Toasted Almond Pie Crust dough can be frozen for up to three months. Form the dough into a ball and wrap it tightly with plastic wrap, then place it in a freezer zip-top bag. Let the dough thaw overnight in the refrigerator before rolling out and baking.

Allow the dough to thaw in the refrigerator overnight, then proceed to bake and fill the crust.

How to Roll out and Pre-Bake this Pie Crust: 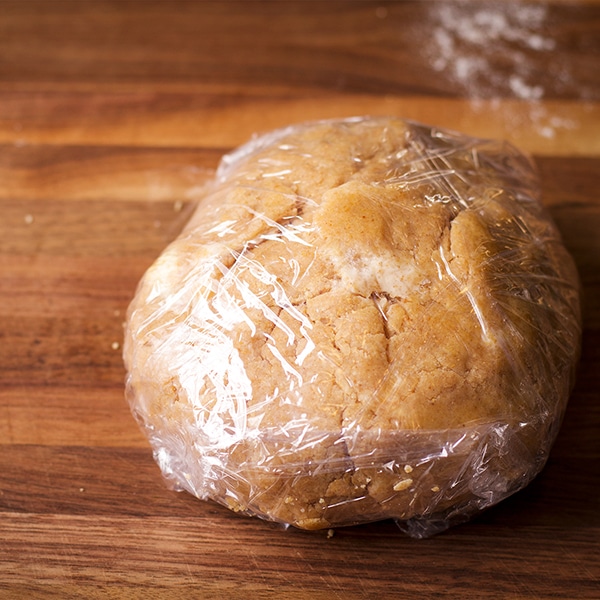 #1. Roll out the pastry and fit it into the pie plate.

Sprinkle some flour over a clean work surface. Keep about 1/2 cup of additional flour within arm’s reach. Put one piece of the dough on the floured work surface and sprinkle the top with more flour. Roll the dough out into a 14-inch circle. I like to use a long rolling pin with tapered ends for this process. 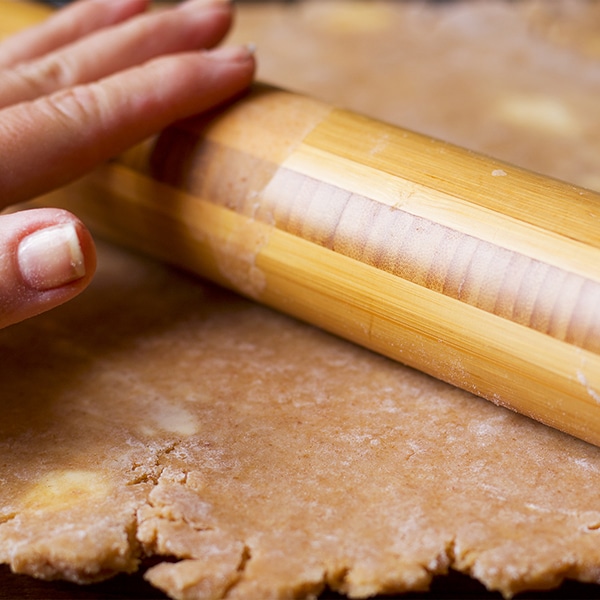 #2. trim and shape the edges of the dough.

#3. Freeze the pastry and preheat the oven.

Fold the foil over the edges of the crust very gently. For the first several minutes of baking, it’s important to weight down the pie crust. Otherwise the crust will puff up as it bakes making it very difficult to fill later on. I like to use dried beans to weight the crust, but you could also use pie weights. (I’ve been reusing the same beans for years, storing them in a ziplock bag.) You’ll need 1-2 pounds of dried beans. 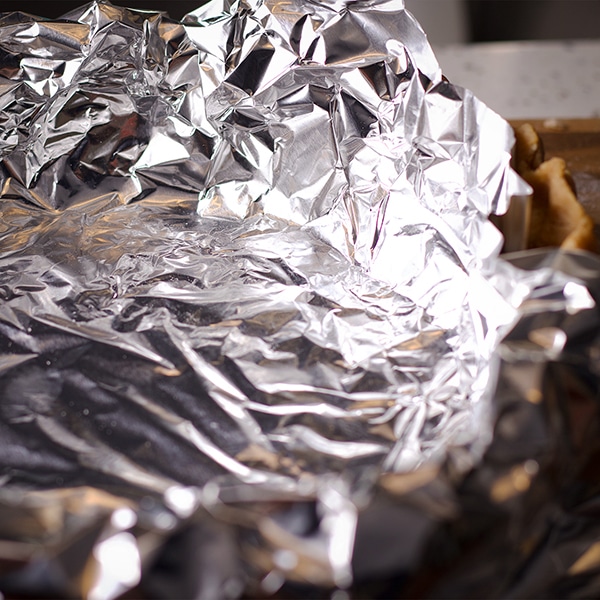 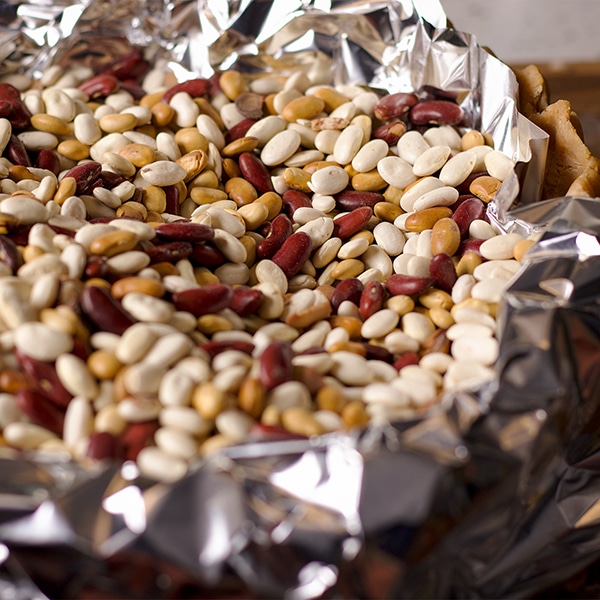 Place the pan in the center of the pre-heated 400 degree oven and bake for 25 minutes. Remove the pan from the oven and gently pull up the edges of the foil and remove from the pan along with the beans.

Using a fork, pierce the crust bottom all over, 10-12 times, gently twisting the fork with each piercing to slightly enlarge the holes.

how to keep the edges of the pie crust from burning:

If you are fully pre-baking a pie crust and it looks like the edges are in danger of burning, here’s what to do:

Pro tip: For the flakiest crust with very little shrinkage, freeze the dough for 30 minutes after rolling it out and fitting it into a pie plate. Bake it in a preheated oven directly after removing it from the freezer.

If your recipe calls for a partially or fully pre-baked pie crust, follow the step-by-step instructions directly above this recipe.

For the ice water: Add a couple of ice cubes to a glass or measuring cup and add some water. Let it sit for a few minutes to chill the water. Then measure out the water only, adding it by tablespoons to the pie crust dough.

For light, flaky pastry, do not overwork the dough.

I almost always use my hands to make pie crust dough because I find it easier to get a feel for how much moisture is in the dough without overworking it. The goal is to add just enough water for the dough to stick together but not so much that it feels wet. By working with my hands, I can gently squeeze the dough together as I toss it with the water. As soon as it feels like the dough is moist enough to hold together, shape it into a ball and wrap it up. Overworking the dough encourages gluten formation and results in tough, less flaky crust.