This elegant Pear Tart filled with Frangipane (almond cream) and topped with Red and White Wine Poached Pears tastes just as impressive as it looks. And, while it might appear difficult to make, it's surprisingly simple. As most good things are.

The tart is best eaten the day it's made, but each component - the pastry dough, frangipane, and poached pears can be prepared days in advance. 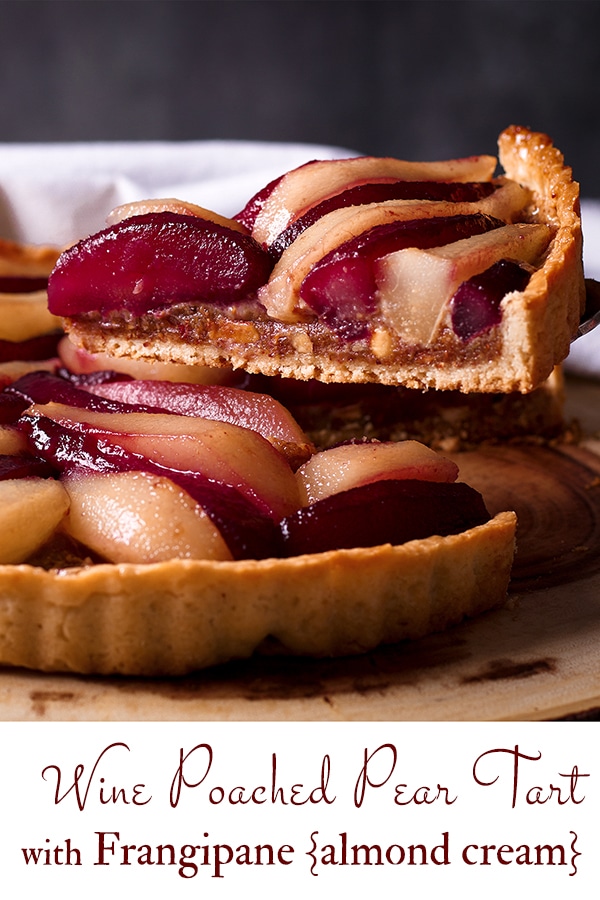 This is one of those desserts that you make when you really want to impress people with your mad baking skills but you don't actually want to put in that much effort. To be clear - this pear tart is not as simple as a quick batch of 1-hour cupcakes or a giant skilled-baked chocolate chip cookie. But, it's also not on the level of anything you'd need a degree in pastry arts to make. It just looks like it is.

Honestly, I think if you are someone who hasn't really baked pastry at all, this tart is a great recipe to start with. The dough comes together easily with the use of a stand mixer. The frangipane requires little more than blending all the ingredients in a food processor. And, poached pears are literally nothing more than sliced pears cooked in wine.

After that, all that's left to do, is bake the tart and bask in the oooooh's and ahhhhhhh's of everyone lucky enough to get a slice. 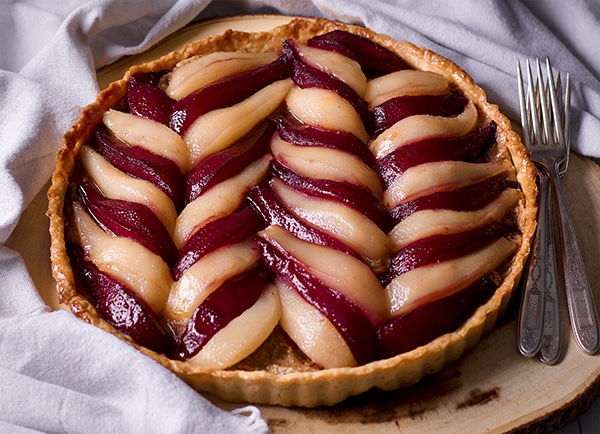 Preparing this pastry dough is simple but it's super-duper important to keep it cold ALL. THE. TIME. The dough contains a high proportion of butter (mmmmmm, butter). Keeping that butter cold is vital to the texture of the baked pastry.

Cold butter is less likely to be absorbed by the flour so that when you roll the pastry out, you get some interwoven layers of fat and flour. As the tart bakes, the butter melts, leaving pockets in the dough. This process is what creates a pastry that's light and flaky.

If the butter melts and blends into the flour before baking, you'll end up with a dense, cardboard-like texture. Not what we're going for here. Also, warm pastry dough is super difficult to work with.

So, before you begin to make the dough, cut the butter into chunks and pop it into the freezer for about 20 minutes to partially freeze it. Then, let a stand mixer do the work of gently mixing the butter into the flour, adding some cream and water to bring it all together.

Be careful to not over mix the dough - small pieces of butter throughout the dough is good!  Wrap it up and pop it into the refrigerator for at least 2 hours before rolling it out. Press the dough into a tart pan, freeze it for about 20 minutes, and then assemble and bake the tart.

The dough can be prepared up to 2 days in advance, storing it tightly wrapped in the refrigerator. It can also be frozen for up to 2 months, double wrapped in plastic. 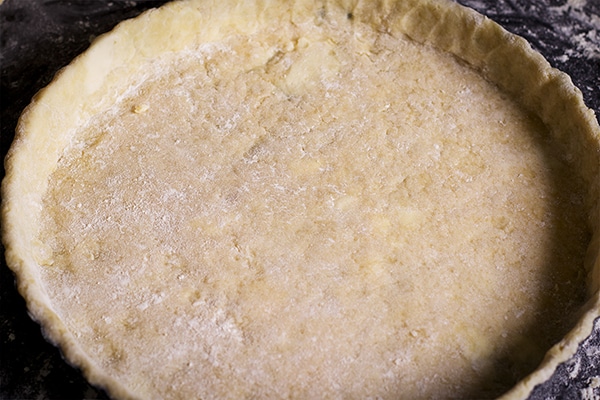 It's important to keep the butter cold and not over mix the dough. You should be able to see pieces of butter in the dough.

The option to partially pre-bake the crust

In this pear tart recipe, you'll see an option to partially pre-bake the crust before filling with frangipane and poached pears. This is simply a matter of taste.

If you decide to not pre-bake the crust, the finished texture will be tender and delicious. It will still be sturdy enough to hold slices of tart together, allowing you to serve beautiful slices. But it won't have an audible crunch as you slice and eat it.

If you decide you want to pre-bake the crust, the finished texture will be quite crispy. The difference in texture is similar to the difference between a fig newton and vanilla wafer. Both are delicious, it just depends on what you're going for.

My husband prefers the softer texture while I lean slightly towards liking the crispy texture more. But, honestly, either option is good.

If you decide to partially pre-bake your pie crust, here's what to do:

How to poach pears in wine

Honestly, as much as I love this tart, give me a plate of nothing but these poached pears and I will be blissfully happy. I'm telling you... something magical happens when you cook pears in wine.

The process is simply a matter of peeling and slicing pears and cooking them for a few minutes in red and white wine. The pears will keep for up to a week if you store them in the cooking liquid, so you can prepare them days in advance. The only dangerous thing about making them ahead of time is that you might eat them all before you've had a chance to make the tart. 🙄

What kind of pears to use and how to determine that they're ripe: 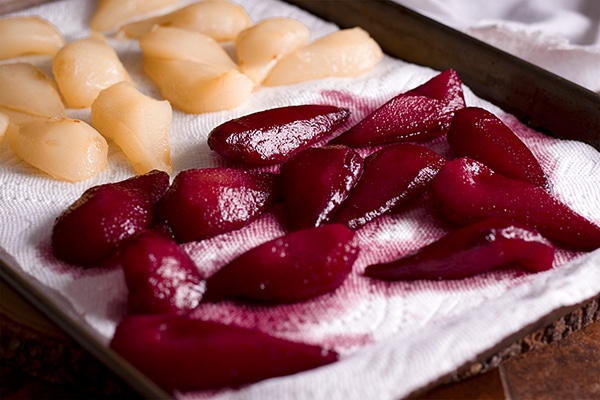 On that note, if you are one of those people who either: a) doesn't like red wine or, b) doesn't like white wine, or c) doesn't like wine at all (god forbid 😩), I'm on my knees begging you to try the recipe as is.

Both the red and white wine poaching liquid contain some sugar to sweeten them up and cancel out any bitterness. As the pears poach, all the alcohol evaporates, leaving behind a gorgeous substance that is pure liquid gold. Or, as my friend Judy calls it, "the precious".

Seriously people. It doesn't matter what kind of a wine drinker you are or if you aren't a wine drinker at all. The liquid that's left behind after poaching is so incredibly delicious.

The recipe instructs you to let this liquid gold simmer for a while so that it reduces down into a syrup. The white wine syrup is then brushed over the baked tart, adding flavor, and giving it a lovely shine.

But, you'll have plenty left over. Keep both the red and white wine reductions in the refrigerator and then pour them over ice cream, cake, pancakes.... shoe leather... seriously, anything. You can also mix it into cocktails. Because it's liquid gold.Who wants a cocktail made with liquid gold? 🙋🏻‍♀️ ME, ME, ME!

My favorite thing to make with the leftover wine sauce...

Profiteroles (cream puffs) are buttery little balls of choux pastry (pâte à choux) baked until light, tender, and puffed up to form a hollow center. They are the perfect vessel for pastry cream, ice cream, whipped cream, or anything your imagination, and taste buds, can dream up. But, filled with ice cream and topped with a drizzle of the red and white wine reductions from this tart is my all time FAVORITE way to eat them. 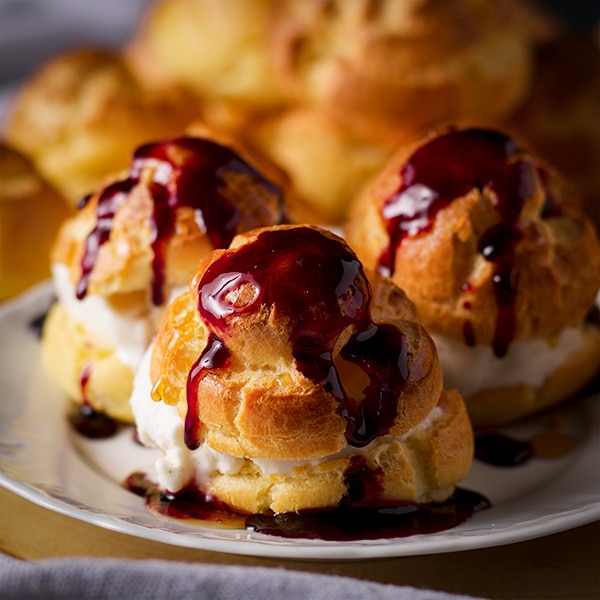 What the heck is frangipane?

Frangipane, also called Almond Cream, is a paste made from ground almonds, almond paste, sugar, butter, and eggs. It's often compared to marzipan but it's closer in consistency to pastry cream and often used in the same way - as a filling for pastries like croissants, tarts, and cakes.

In addition to being absolutely delicious, frangipane is incredibly simple to make. You basically put everything in a food processor and process it into a paste. You can make it several days in advance, storing it in an airtight container in the refrigerator. 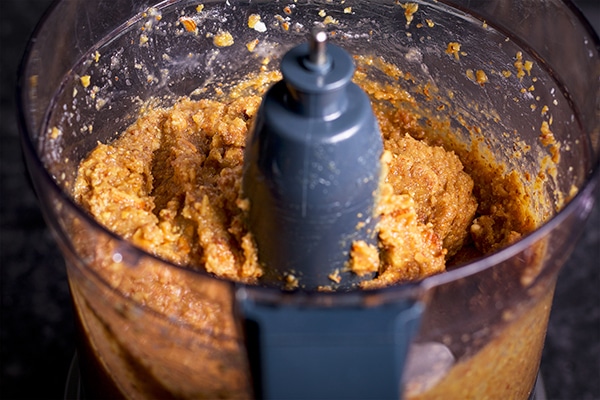 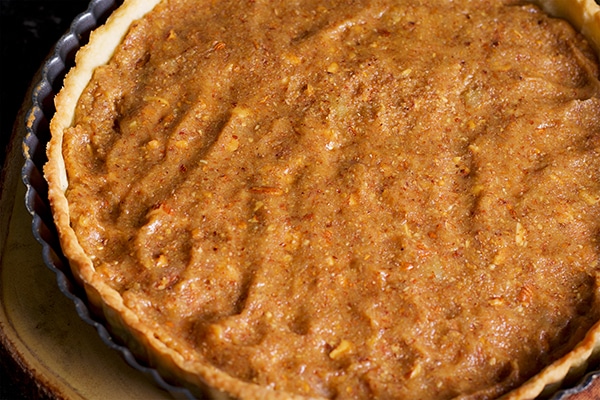 The fun of having red and white pears is that you can create a pretty design on the top of your tart. As you can see, I decided on a herringbone pattern. The first time I made this tart, I had a loose idea of what I wanted the tart to look like. I voiced this idea to my friend Judy (the homemade pasta queen) and she brought it to life, arranging the pears in the lovely pattern you see here. 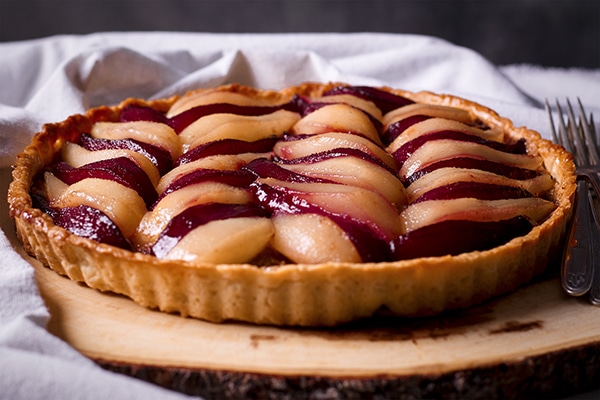 I've also arranged them in a circle that looks a bit like the petals of a flower, which is also lovely. But, I'm sure there are a million different ways you could arrange the pears, so get creative and have fun with it.

To arrange the pears in a pattern similar to what you see here, lay the slices core side down at a 90 degree angle, pressing them down gently into the frangipane and alternating colors. As you build the rows, tuck the ends of the slices underneath the slices in the previous row.

Even after poaching, the pears are surprisingly sturdy, so if the arrangement isn't looking right to you, just lift the pears off the tart and start again.

One final word of advice:

With every component pre-made, assembling and baking the tart is a piece of cake. Or, um, a piece of tart.😊

Used to make this tart:

As an Amazon Associate I earn from qualifying purchases.

This elegant Pear Tart filled with Frangipane (almond cream) and Red and White Wine Poached Pears tastes just as impressive as it looks.

For the Tart Dough:

For the wine poached pears:

For the Frangipane (almond cream):

Bake and Assemble the Pear Tart:

*This tart is best the day it's made, although all the individual components - pastry, frangipane, and poached pears can be made in advance. 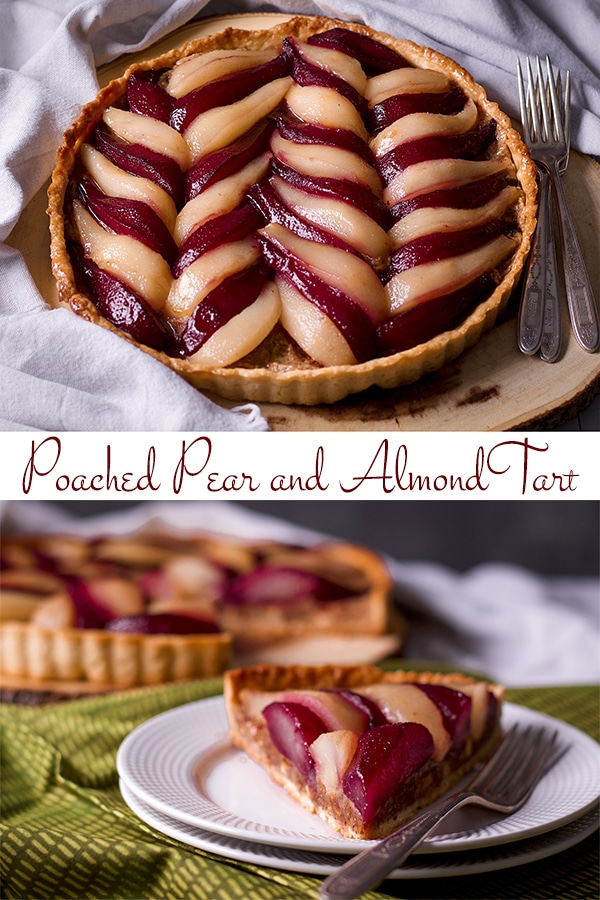