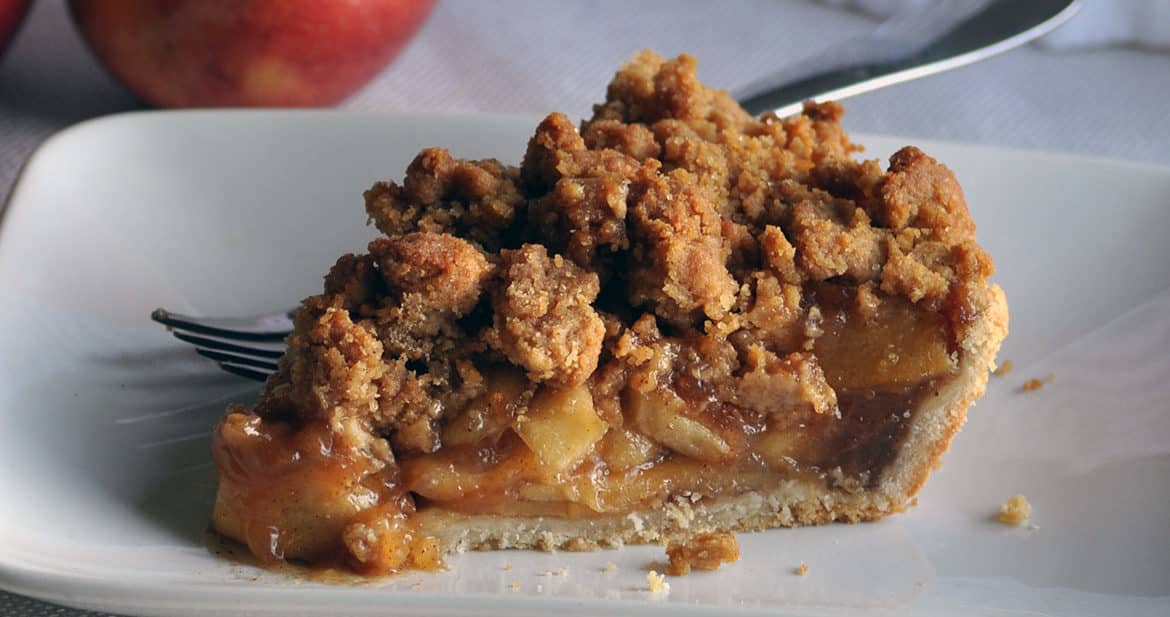 This Apple Pie Recipe is my family's favorite. The apple pie filling is full of caramel and spice, with a flaky crust & brown sugar topping.

I can't make apple pie, or applesauce, or apple crisp, without thinking of my mom. Every fall she buys a few boxes of Colorado Macintosh apples and cooks pan after pan of apple pie filling, apple crisp filling, and applesauce, canning it all for use later in the year. As such, all three were staples of my culinary upbringing, and one or the other continues to make it's appearance at holiday dinners and birthday celebration. They are always very well received.

Her apple crisp topping is still the best I've ever eaten. Perhaps I'll share that recipe someday... but for now, let's talk Apple Pie, and why this apple pie recipe is the best.

They also don't usually require you to cook the apple pie filling before pouring it into the crust. The problem with that, I find, is that the bottom crust gets a bit soggy. By partially pre-baking the bottom pie crust and cooking the apple pie filling a bit just to thicken all that apple juice, you'll end up with a deliciously crispy bottom crust.

You'll also notice that this recipe calls for Sorghum Syrup. Alternatively, you can use Maple Syrup, which is also delicious, but I urge you to try Sorghum. I discovered Sorghum Syrup last November, while trying to recreate the traditionally (in my opinion) much-too-sweet  Pecan Pie into something dark and rich and complex, rather than something so sugary that it sets my teeth on edge. I swapped corn syrup for Sorghum and added some Bourbon. Sublime. (Here's that Pecan Pie recipe, if you'd like to check it out.)

Sorghum syrup  is made from sorghum grass juice. The flavor is complex, deep and almost leathery. It also has a very high ratio of taste to sweetness. It is sweet – but not sickeningly so like corn syrup. In fact, Sorghum used to be fairly commonplace, especially in the south, before the introduction of cheeper (but flavorless and nutrition-less) corn syrup. You can find it at some grocery or specialty stores. I ordered mine on Amazon. It’s a little pricy, but it adds a deliciously deep caramel flavor to this apple pie recipe, making it worth the extra investment.

Finally, I chose to top the apple pie filling with a crumble rather than a top crust so that the result would be a delicious cross between apple pie and apple crisp. I love this combination, but feel free to substitute a top crust in lieu of the crumb topping.

FOR THE APPLE PIE FILLING:

FOR THE CRUMB TOPPING:

While the pie is baking, make the crumb topping: