This recipe for Stuffed Shells is sponsored by Mahon Menorca. 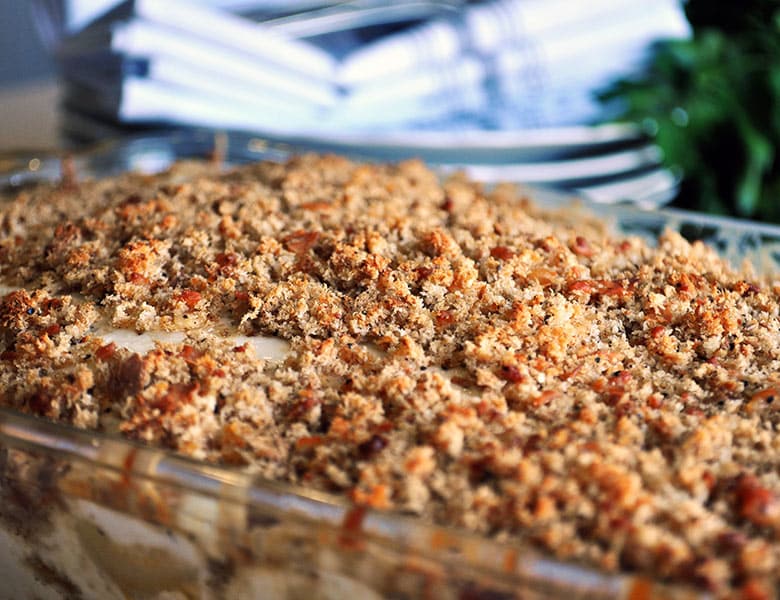 Friends. Today we are going to talk about one of my favorite things in the whole wide world: Cheese.

My favorite thing at any given time depends on what I’m in the mood for – especially when it comes to food. I could tell you what sounds really good right now… but don’t ask me to choose my favorite.

Declaring a favorite is just so final. It makes me feel boxed in. And, feeling boxed in does not bring out the best in me. (Understatement of the century.)

And yet… I did just write a sentence declaring cheese as one of my favorite things. 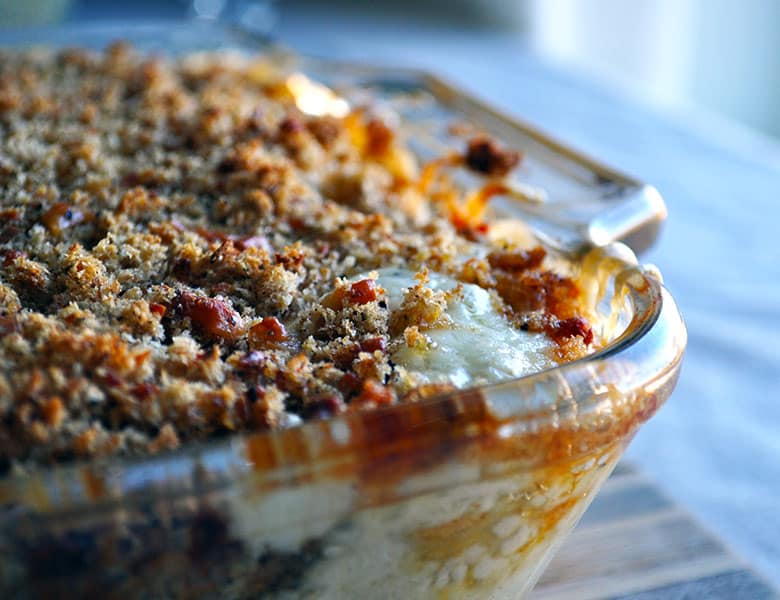 I can make such a statement with no regrets because cheese is one of the few things in life I would be truly devastated about giving up. If for some strange reason, I could never eat potato chips again, my life would go on completely unaffected. But, take away cheese and I fail to see the point in getting up in the morning.

Ok. That may be a bit overdramatic. (No, it’s not.) If I had to, I’m confident of my ability to live a happy life without cheese. (No… Not really.) There are so many other good things in life that I probably wouldn’t even miss cheese all that much. (Totally lying now.)

I feel very strongly that NO ONE should ever have to live a life without cheese.

So, you can probably guess how I responded when the folks at Mahon Menorca said, “Hey, can we send you some cheese and will you make a delicious holiday inspired recipe with it?”

After (a bit too excitedly) shouting “YES!!!” into the phone and realizing I’d never heard of Mahon Menorca, I got online to find out what I’d just agreed to. The cheese comes from Menorca, one of Spain’s Balearic islands in the Mediterranean Sea.

… prompting me to send the following (totally reasonable) request: Dear Mahon Menorca cheesemakers… I don’t believe I can properly experience all the delicious nuances in the magnificent flavors of your cheese if I’m not eating it on one of your beaches. Rather than sending the cheese to me, perhaps you should bring me to the cheese.

Just kidding. I didn’t actually ask. I just wanted to.

The island contains a network of small family farms in which cattle freely graze. (Some cows have all the luck.) Interestingly, the grazing cows have contributed to an ecological balance resulting in UNESCO declaring Menorca a Biosphere Reserve.

As you might expect, cheese made in paradise is delicious.

When the package arrived, I cut small pieces of each for myself, my husband, and my two teenage daughters. Then I had to hide the cheese in the butter drawer so that there would be enough left to make these stuffed shells. Speaking of which…

Let’s talk about these four cheese stuffed shells for a moment, shall we?

Jumbo pasta shells are stuffed with ricotta, a blend of all three Mahon-Menorca cheeses, garlic, spices, and chili smoked salmon. They are then smothered with a LOT more cheese before being covered in cream sauce and spicy bread crumbs. And, just to guild the lily, the cheesy shells are served with Chimichurri sauce. 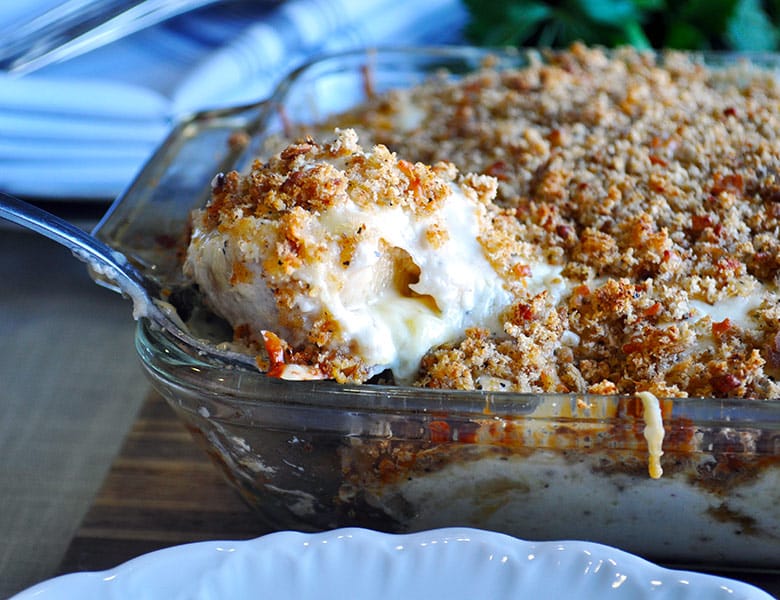 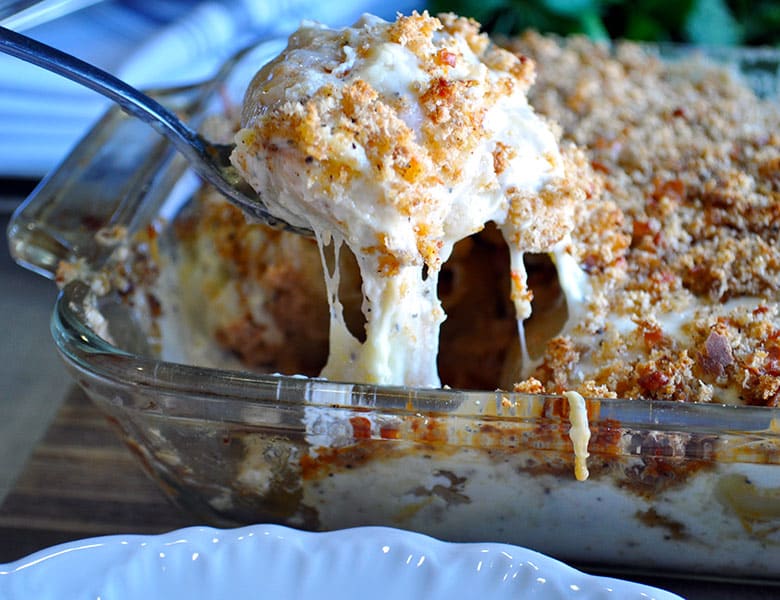 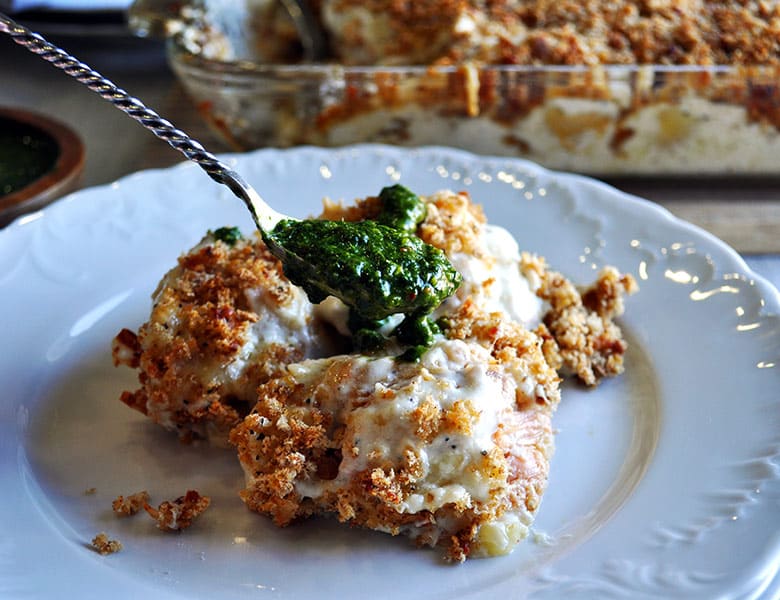 Ok, people. If I have any credibility with you at all whatsoever, trust me when I tell you that you NEED these cheese stuffed shells on your holiday table.

It’s one those dishes that begs for special occasions that are all about relaxing into the pleasure of great food shared with people you love.

I would never begrudge you the right to make these decadent stuffed shells on any old Wednesday, but for most of us, this is the type of dish that gets made on special occasions. It involves decadent ingredients befitting dinner party celebrations, Thanksgiving, Christmas, Easter, and the like. Those occasions for which you’re more than willing to spend a bit more money and indulge in a few more calories than your average weekday supper.

Having said that, this is a rich dish. Plan on serving only two or three shells per person as a main dish, or just one shell per person as a starter. The recipe can easily be halved or doubled. If making half the recipe, use a 9-inch square baking dish. If doubling the amount, use two 9x13 inch dishes.

The stuffed shells can be assembled in advance. 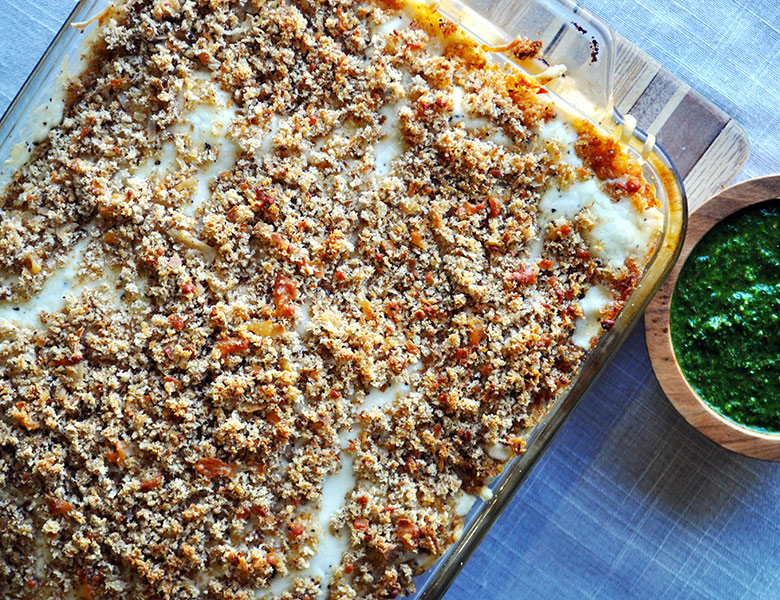 I am the kind of hostess who wants to enjoy her guests and not be stuck in the kitchen when they arrive. So, every dinner party dish I serve can be made at least somewhat in advance. These stuffed shells are no exception.

You can assemble the entire dish – cream sauce and bread crumbs included – up to 24 hours ahead of time, covered in the refrigerator. Allow the dish to sit at room temperature for 30 minutes before baking and then pop it in the oven.

The Chimichurri Sauce can also be made up to 24 hours in advance. Store it in a covered container in the refrigerator until ready to serve.

There are several components to these stuffed shells, but they come together in a flash.

Ok. “In a flash” is relative. I just don’t want you to look at the various components in the recipe and think that it’s super complicated. If you look at the recipe, you’ll notice how many times the instructions say something like, “dump everything into a bowl and mix.”  The whole dish can be assembled in about an hour.

Use any combination of Mahon-Menorca cheese. 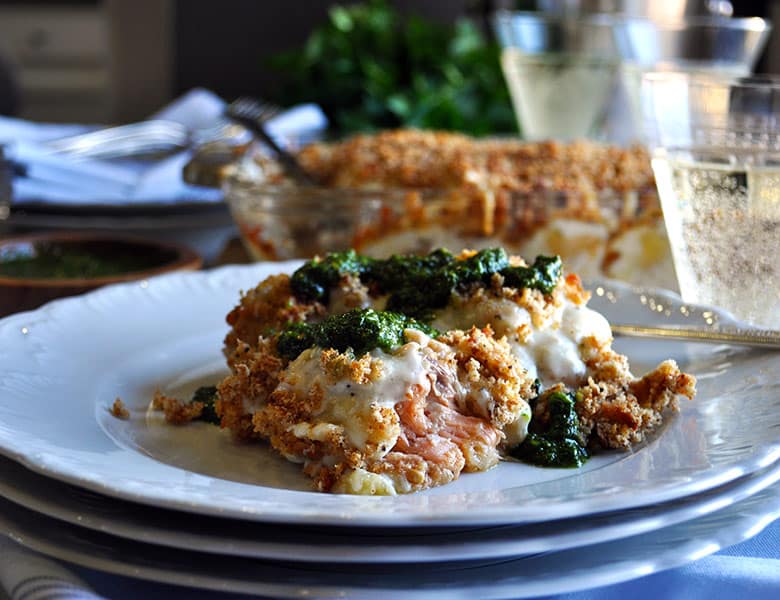 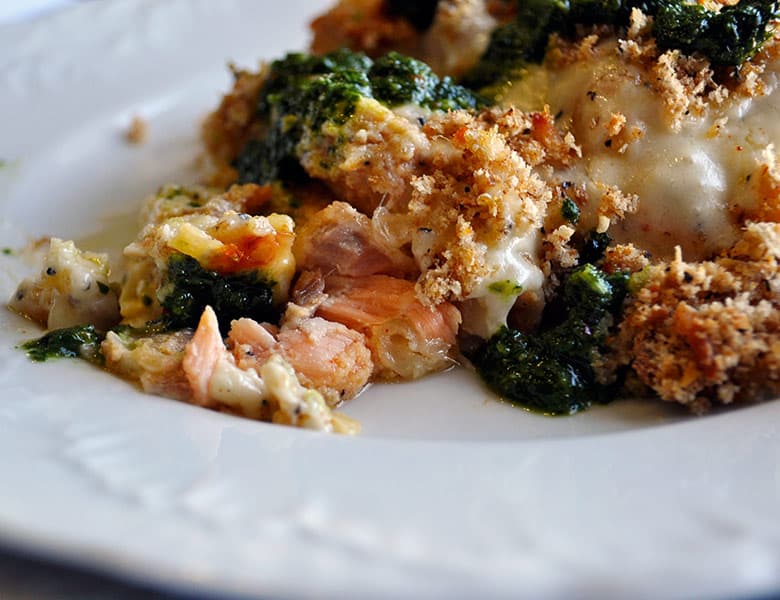 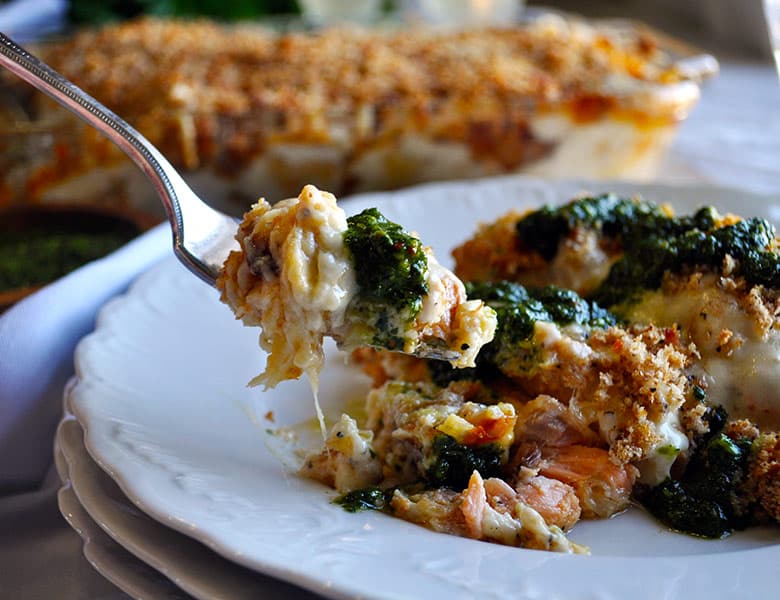 Having three varieties of Mahon-Menorca cheese on hand, I used them all, shredding each and then tossing them together. The combination of cured, semi-cured, and raw milk cheese is fantastic. But, if you’d prefer to use just one or two varieties, go for it. Your stuffed shells will still knock the socks of everyone you serve them to. 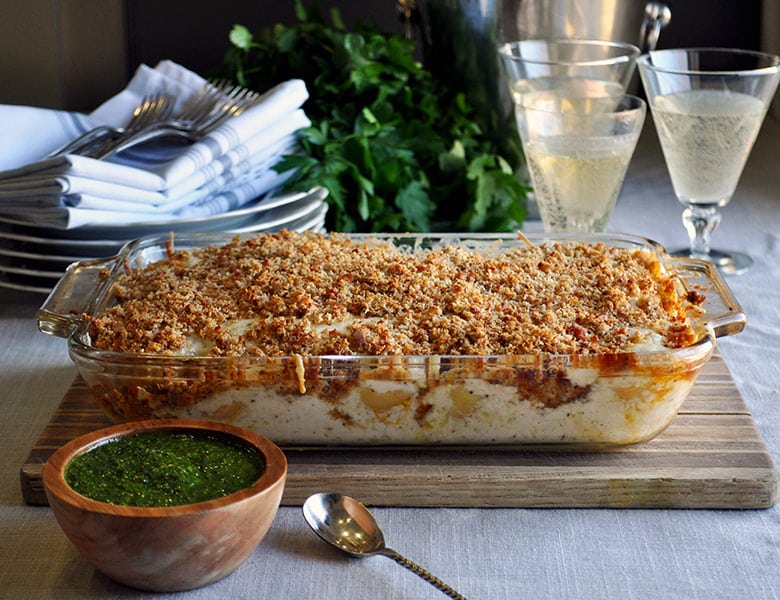 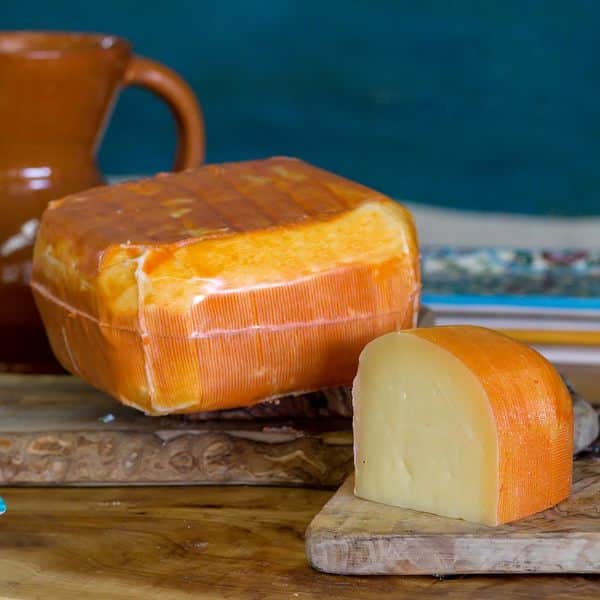 FOR THE CHIMICHURRI SAUCE:

FOR THE BREAD CRUMB TOPPING:

FOR THE STUFFED SHELL FILLING:

FOR THE CHEESE AND CREAM SAUCE:

PREPARE THE STUFFED SHELL FILLING AND FILL THE SHELLS:

A big THANKS to Mahon-Menorca for partnering with me on this post and making these Stuffed Shells a reality.