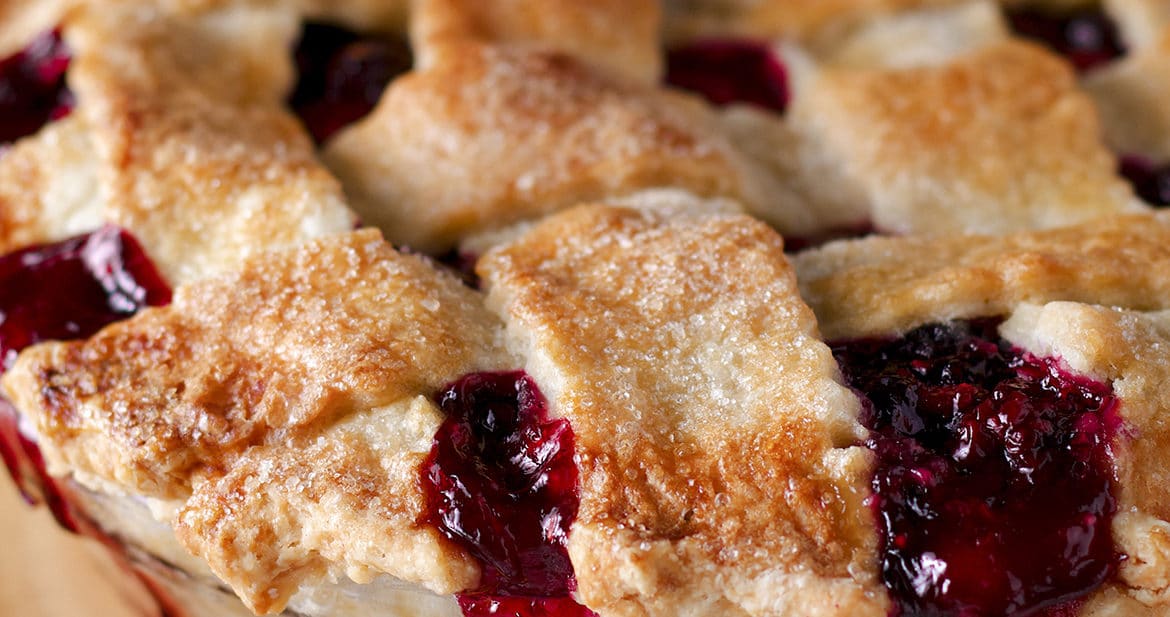 This has been my go-to pie crust recipe for the past 25 years. I've used it to make hundreds of pies of every variety and it hasn't failed me yet. It's tender, flaky, flavorful, extremely easy to work with, and truly worthy of the name "fool proof".

Making pie dough from scratch is not difficult. And yet, from-scratch pie crust has a reputation for being tricky and temperamental. The most common problems people have when making pie crust from scratch are:

This Foolproof pie crust recipe prevents these problems with the addition of two simple ingredients: a touch of vinegar and an egg.

Why do you add vinegar to pie crust?

Having said that, it's still important to handle the dough with care. The key to a flaky, tender crust is to not allow gluten to develop in the dough. If you knead pie crust dough like you're making bread, you will end up with a tough pie crust regardless of whether or not you added some vinegar.

Vinegar helps prevent pie crust from shrinking as it bakes.  If you've ever had a pie crust shrink as it bakes, you know how frustrating this problem can be. You fit the dough into the pie plate, crimping the edge along the top of the dish only to take it out of the oven and see that the edge of the crust has shrunk halfway down the sides of the pan while baking. So frustrating.

Vinegar to the rescue! Shrinkage happens because the gluten in the flour is too tightly wound. As the crust bakes, those tight strands of gluten constrict, pulling the dough in. The acid in vinegar helps keep the gluten in the flour relaxed and thus, safeguards agains shrinkage. Using shortening instead of butter will also help the dough hold its shape as it bakes. More about that in a bit.

This dough will keep for days in the refrigerator, thanks to that splash of vinegar. If you allow pie crust dough to sit in the refrigerator for a day or two, it can oxidize and develop a grayish color. Aside from being slightly off-putting, gray dough will not hurt you. However, the oxidation process will cause the dough to be kind of slack and floppy, making it difficult to work with and unable to hold its shape as well while baking. Vinegar prevents this oxidation process, keeping the dough fresh for as long as 5 days if it's tightly wrapped and stored in the refrigerator.

Why add an egg to pie crust dough?

The other thing that just one egg does for pie crust is make it easier to roll out. The protein in the egg makes the dough more pliable, guarding against breakage and giving it a nice elasticity that makes it so much easier to work with. This dough is quite elastic and rarely breaks, and when it does, it’s super easy to stretch and press as needed to cover the inside of a pie plate or the top of a pie.

Should you use shortening or butter in pie crust dough?

This is a very difficult question to answer, and in the end, doesn't really matter all that much because both vegetable shortening and butter in this recipe will result in a gorgeous, flavorful crust. Use whichever you prefer, but here's the pros and cons of each...

The pros of vegetable shortening:

The pros of using butter: 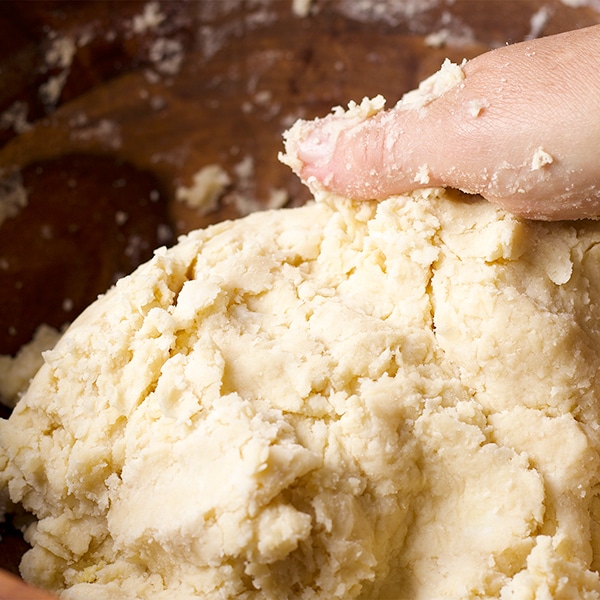 #1. After mixing and chilling the dough, divide it into quarters. Work with one quarter at a time and leave the rest of the dough wrapped so it doesn't dry out. Sprinkle some flour over a clean work surface. Keep about ½ cup of additional flour within arm's reach.

Put one piece of the dough on the floured work surface and sprinkle the top with more flour. Roll the dough out into a 14-inch circle. I like to use a long rolling pin with tapered ends for this process.

#2. Using a large, flat spatula, gently fold the pastry in half and then in half again so that you have a folded triangle of dough.

#3. Place the dough in a pie plate so that the point of the triangle is in the center of the pan. Gently unfold the pastry to cover the pan and use your fingers to press the dough into the corners of the pan, letting the edges of the dough drape over the sides of the pan.

The pastry is now ready to be filled and baked.

Q: How do I pre-bake or partially pre-bake a pie crust?

A: Many pie recipes call for a pre-baked or partially pre-baked pie crust. Baking the crust before filling it is easy to do. Here are step-by-step instructions for how to pre-bake a pie shell.

Q: How long does this pie crust dough keep in the refrigerator?

A: Foolproof pie crust dough will remain fresh in the refrigerator for up to 5 days. Make sure the dough is tightly wrapped in plastic wrap or in a zip-top bag or another air-tight container.

Q: Can this pie crust dough be frozen?

A: Yes! This pie crust dough can be frozen for up to three months. Form the dough into a ball and wrap tightly with plastic wrap, then place in a freezer zip-top bag. Let the dough thaw overnight in the refrigerator before rolling out and baking.

Q: Can you taste the vinegar in the pie crust?

A: Nope. Not even a little bit. The recipe makes quite a bit of dough - enough for 2 double crust pies - and only calls for 1 tablespoon of vinegar. That one tablespoon is enough to keep the crust nice and tender, but not enough to taste it in the baked crust.

Q: Can I use another kind of vinegar besides white distilled?

A. Yes! It's the acid in the vinegar that keeps this pie crust tender, so any kind of vinegar will work. However, I'd stay away from vinegars that have color, like balsamic vinegar. I'd also avoid vinegars with a particularly strong flavor, or any kind of added flavoring. Even though there's only a tablespoon of vinegar in this entire recipe, using a flavored vinegar or one with a concentrated, potent flavor, might result in an off-putting taste. I'd suggest sticking to mild vinegars such as white distilled, unseasoned rice vinegar, apple cider vinegar, and white wine vinegar.

Q: Can this recipe be cut in half?

A: Yes. This recipe makes 4 pie crusts, enough for 2 double crust pies. The dough freezes well (see tips for freezing above and in the recipe notes), so if you don't need that much, you can always freeze the extra. However, you can also easily cut the recipe in half. When I cut this recipe in half, I usually still use one whole egg, reducing the amount of water slightly to make up for the fact that the egg contributes moisture to the dough. Here are the amounts: 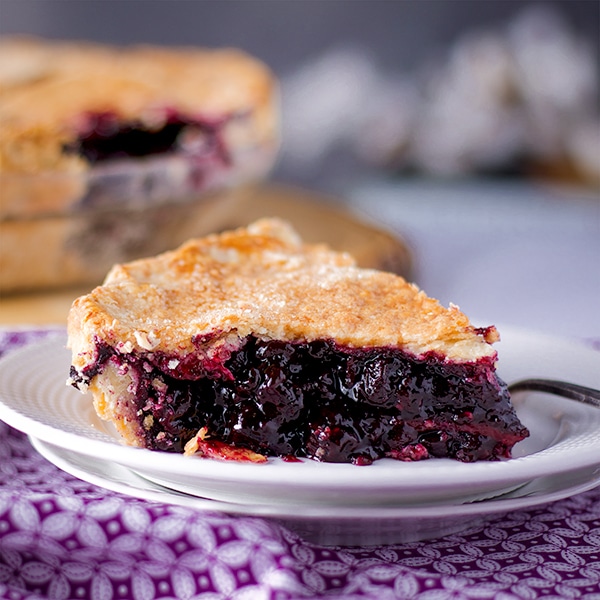 As I've already stated, this is my go-to pie crust recipe. However, when I'm making a cream pie, like this Ultra Rich Chocolate Cream Pie, I usually use this Toasted Almond Pie Crust. The nutty flavor and super crispy texture of Toasted Almond Crust is sublime with the rich creamy texture of a cream pie.

To line a pie plate with dough:

--> Here's How to Pre-Bake or Partially Pre-Bake a Pie Crust.

To cut the recipe in half, use the following amounts: 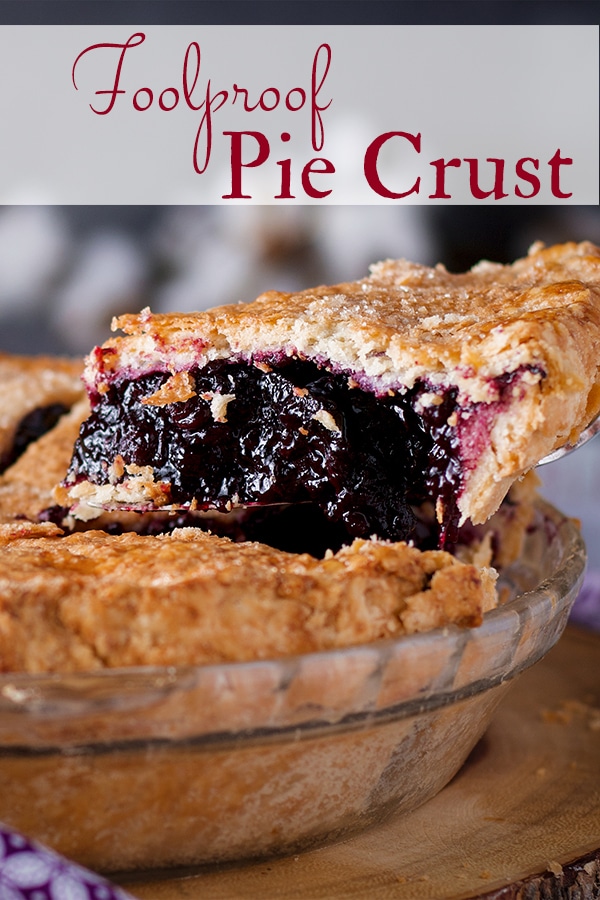