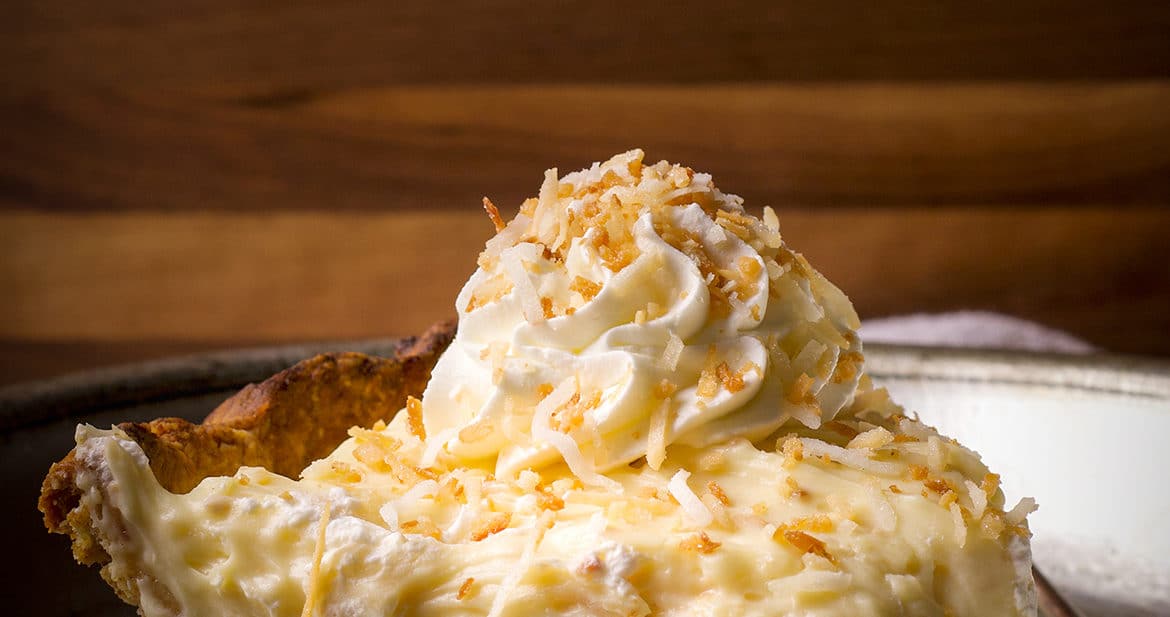 This Coconut Cream Pie is easily at the top of my list of all-time favorite desserts.

It's the ultimate in rich, creamy, coconut deliciousness and you might be tempted to just have a "small slice", but should give it up right now because there is no such thing.

Considering my utter love and devotion to Coconut Cream Cake, it's no surprise that Coconut Cream Pie is at the top of my list of all-time favorite desserts.

The filling for both Coconut Cream Cake and Coconut Cream Pie are essentially the same thing - coconut flavored pastry cream with plenty of sweet toasted coconut stirred in. It's the ultimate in rich, creamy, coconut deliciousness.

The only difference is whether the filling is piled into a nutty, buttery, super crispy Toasted Almond Crust or sandwiched in between layers of soft, tender coconut cake. May there never come a day when I have to choose between the two. 🥰

Hello. My name is Rebecca and I am a pastry cream addict.

I have always been a fan of rich, creamy desserts. Even as a child, I didn't care for super sugary confections like cotton candy, but would have happily eaten a bowl of pudding or frozen custard at every meal if allowed. So, it's no surprise that I'm obsessed with pastry cream.

My all-time favorite pastry cream recipe is incredibly thick, rich, creamy, and delicious. It can easily hold its own in-between layers of cake or flaky pastry, as a filling for pies and tarts, or piped into cream puffs, doughnuts, or eclairs.

It is, without a doubt, one of the most used, most loved, most versatile, most delicious recipes in my baking toolbox.

Besides being relatively simple to make and delicious, the pastry cream is incredibly stable.

You can even freeze it - something the entire internet says you can't do. The secret to its stability is the addition of gelatin. While other cornstarch thickened sauces, puddings, and gravies can NOT be frozen without turning into a sloppy, gluey mess once thawed, the addition of gelatin in this recipe allow the custard to be frozen without fail. 🙌

Toasted Almond Pie Crust is flaky, nutty, warm, and extra crispy. The combination of butter and toasted almond flour creates a crust that is flaky, tender, and crisp – almost like a crisp butter cookie.

The crispy texture of Toasted Almond Crust creates a delicious base for a variety of pies, but is especially delicious in cream pies like Chocolate Cream Pie, and of course, Coconut Cream Pie.

Just like with the coconut cream filing for this pie, the toasted almond crust can be prepared ahead of time and frozen. Form the dough into a ball and wrap it tightly with plastic wrap, then place in a freezer zip-top bag. Let the dough thaw overnight in the refrigerator before rolling out and baking.

Allow the dough to thaw in the refrigerator overnight, then proceed to bake and fill the crust.

Can You Use a Different Kind of Pie Crust?

Absolutely. If Toasted Almond Pie Crust doesn't float your boat, use whatever kind of crust you like.

My favorite nut-free pie crust recipe is Fool Proof Pie Crust, which has been my go-to pie crust recipe for the decades. I’ve used it to make hundreds of pies of every variety and it hasn’t failed me yet. It’s tender, flaky, flavorful, extremely easy to work with, and truly worthy of the name “fool proof”.

The recipe for Fool Proof Pie Crust makes enough for 2 double crust pies, which is much more than you’ll need for this pie. You can cut the recipe in half, or just freeze the leftover pie crust dough according to the instructions in the recipe’s notes.

How to freeze this coconut cream pie filling:

The most important thing you need to know about freezing the coconut cream filling for this pie is to freeze it before beating in the whipped cream and toasted coconut. The point at which the pastry cream can be frozen is step #8 in the recipe below.

Bake the crust and assemble the pie:

How to freeze the coconut cream filling:

How to keep the edges of the pie crust from burning:

What can you do with the leftover egg whites?