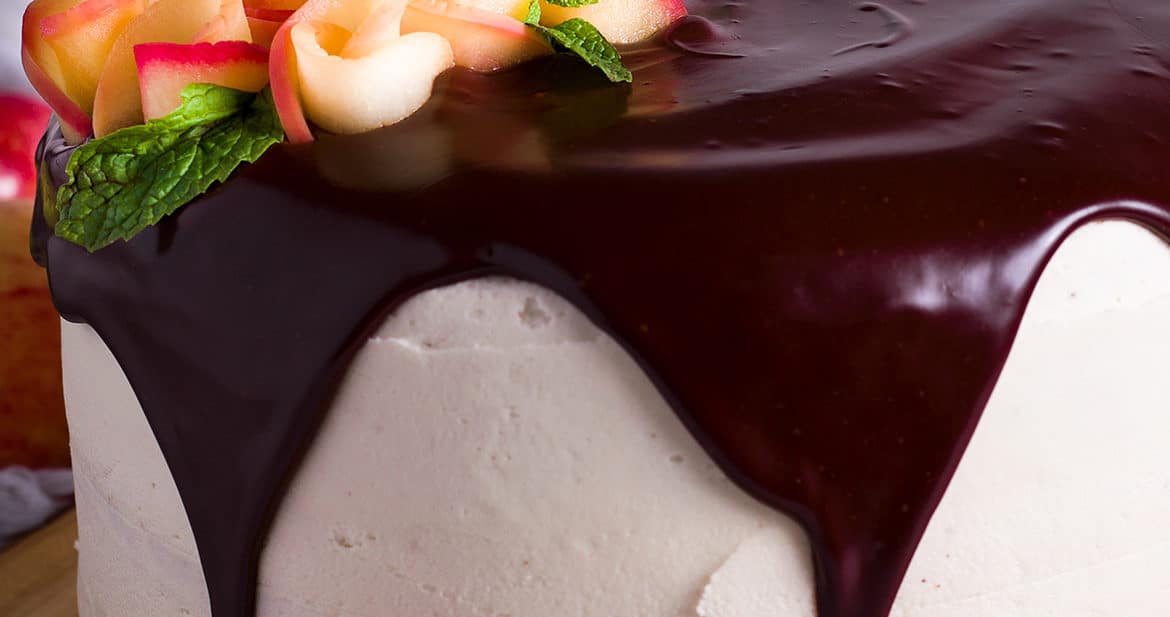 This Apple cake is absolutely bursting with warm apple flavor thanks to concentrated Apple Cider Syrup, shredded sour apples, and a touch of cinnamon, nutmeg, and allspice. Apple Cider Buttercream delivers even more apple flavor and a thick, velvety layer of Dark Chocolate Ganache covers the cake with a blanket of bittersweet luxury. 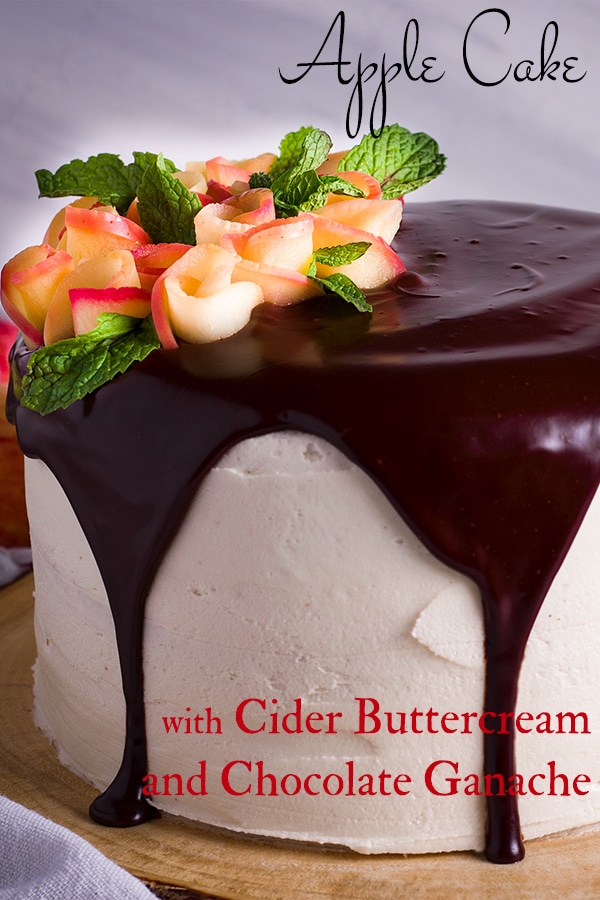 As a child, I have very clear memories of standing in front of a chocolate shop bakery case trying to decide which of the giant caramel apples I wanted. Inevitably, I’d select one covered in chocolate and with a generous sprinkle of salt and chopped nuts.

That combination of flavors and textures is truly one of the best I’ve ever experienced. The cool, tart, crisp apple, next to warm, creamy, sweet caramel. The rich, bittersweet chocolate and salty crunch from the roasted nuts and sea salt. A little bit of tart, sweet, bitter, and salt in every single bite. It’s magnificent.

So, that’s what I was chasing when I stepped into the kitchen with the intention of making an Apple Cake. The problem with apple cake is that it’s actually kind of difficult to get a strong apple flavor. Apples, like most fruit, are largely water. So, adding enough of them to cake batter to achieve a pronounced apple flavor is problematic. The more apples you add, the more liquid you add to the batter, watering it down and creating an imbalance that weakens the cake’s overall structure.

Apple Cider to the rescue

I knew that to get a pronounced apple flavor, adding more and more apples wasn’t the answer. So what then? I thought that adding some apple cider might work… but, once again, didn’t want to water down the batter. To capture the apple flavor and get rid of excess water, I decided to reduce the apple cider into a thick syrup.

I poured a large 1.5 liter jug of apple cider into a skillet and let it boil until it was reduced to just 1 cup. I added half a cup of the apple syrup to the cake batter and the other half to the buttercream. This worked beautifully. The apple cider syrup has a deliciously concentrated, tart apple flavor that goes a long way, boosting the flavor of the cake and the buttercream without watering everything down. 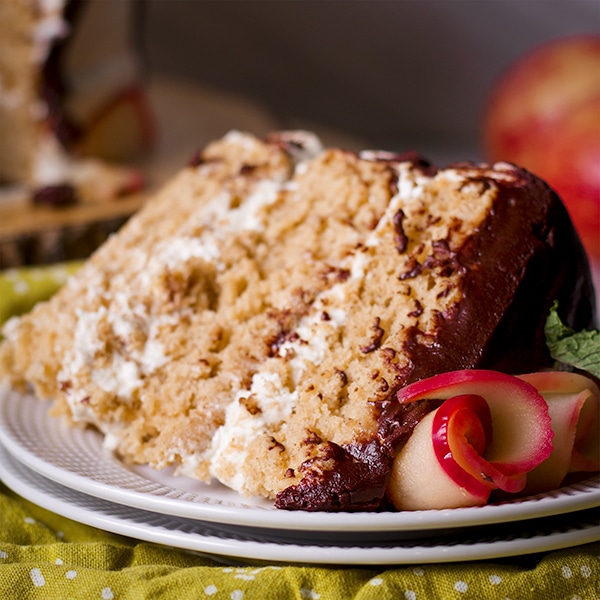 Even though apple cider syrup did a lot more to boost the apple flavor of this cake than the apples themselves, I didn’t feel like I could rightfully call this “Apple Cake” without adding some fresh apples. But… I also wanted the cake to have a fluffy crumb with the apples evenly distributed throughout.

The problem with adding chunks of apples to cake batter is that you can end up with a slightly gummy texture around each chunk of apple. To ensure a fluffy, even texture, I decided to grate the apples instead of chopping them into chunks.

Grating the apples not only allows you to evenly incorporate the apples throughout the batter, it prevents the watery, slightly mushy areas of cake that chunks of apples can create. The result is a supremely moist cake with a tender, fluffy crumb. 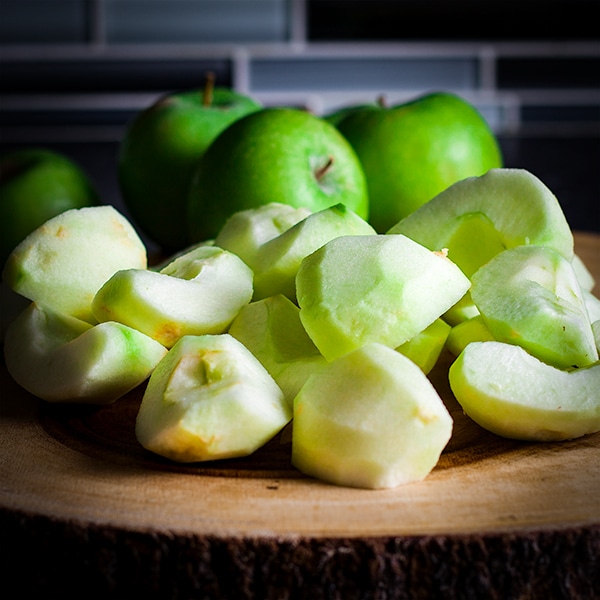 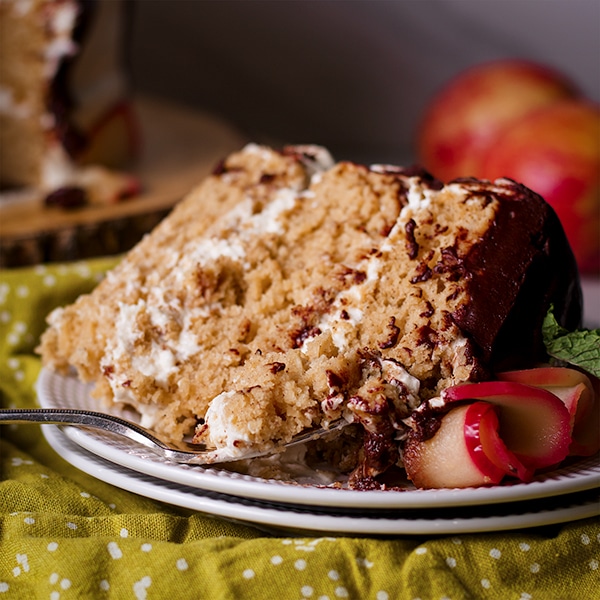 The importance of choosing quality ingredients.

Prue Leith, one of the judges on the British Baking Show, has a simple standard for baked goods and desserts that I love: It has to be worth the calories. Nothing more, nothing less. Do what you have to do to ensure that you feel satisfied and content about what you’re eating. 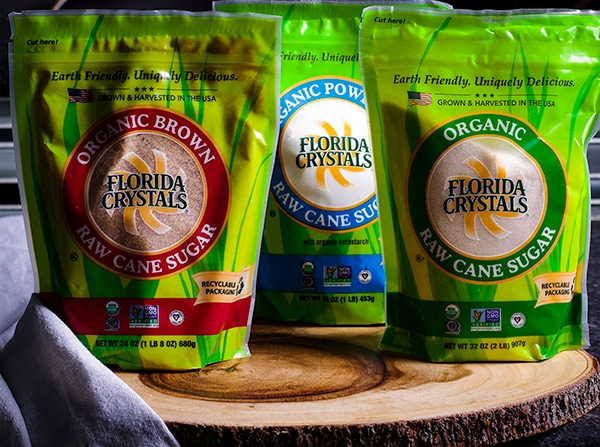 For all three varieties, I used Florida Crystals raw cane sugar because I care about the quality of the sugar I use, AND how the sugar was grown.

Florida Crystals is the only organic raw cane sugar grown in the United States. The sugar is organically grown on sustainable family farms, and it shows in the quality and consistency of the product. 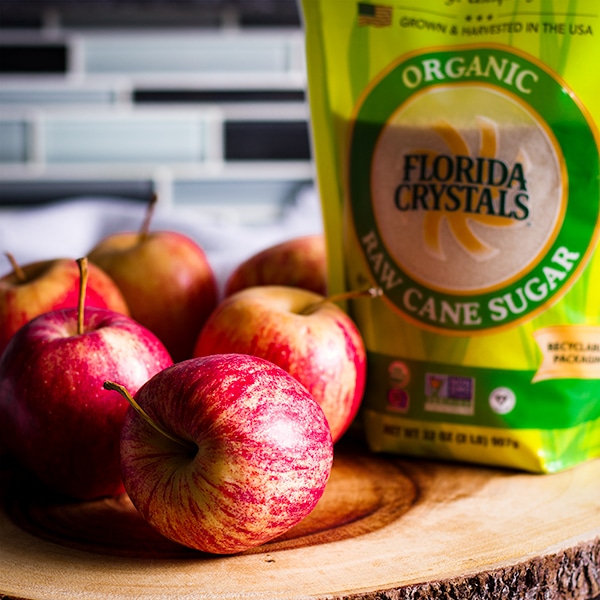 How to Make Apple Roses

I wanted to decorate this cake with something that would hint at the fact that it’s an apple cake, and couldn’t be happier with the little bouquet of apple roses. Apple roses are surprising simple to make. Simply slice a few apples, dunk them in a pot of boiling sugar water, drain, and roll up into adorable little rose buds.

Step#1: Slice out the apple core.

Cut an apple so that you have two halves without a core. 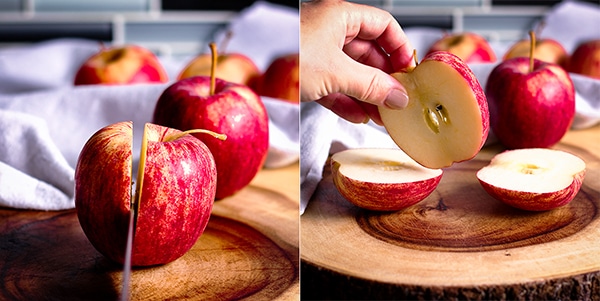 Use a very sharp knife or a mandolin to slice each half into thin slices that are no larger than 1/4-inch thick. 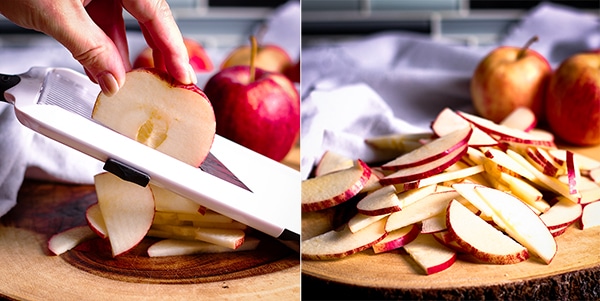 Step #3: Blanch the apple slices into a pan of boiling sugar water.

Add a cup of sugar to about 3 cups of water and bring it to a boil. Drop the apple slices into the water, letting them cook for just a few seconds before draining. This will soften the apple slices and preserve them so that they don’t brown. 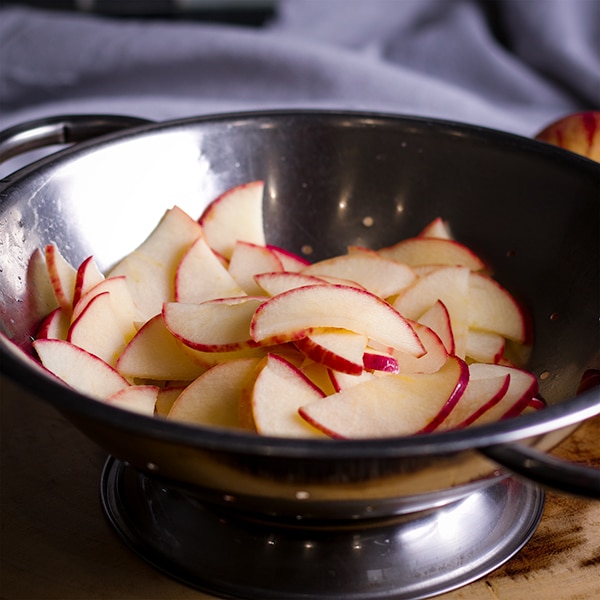 Lay two or three apple slices out on a work surface so that they are overlapping. Then, simply roll them up. 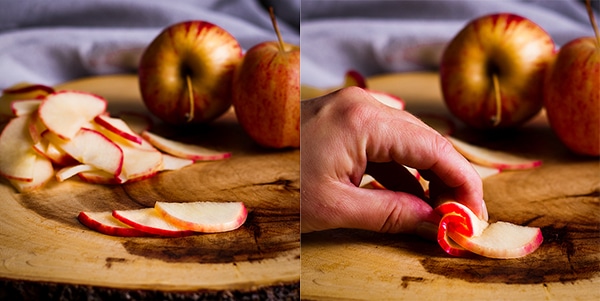 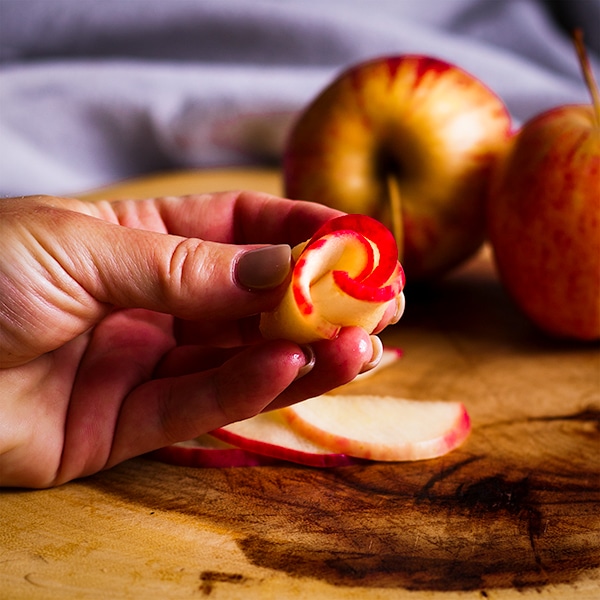 Step #5: Top the cake or cupcakes with apple roses.

Place the apple rose buds onto the top of the cake or cupcakes as you create them, pressing them into the soft ganache, which will hold them in place.

It’s important to have the blanched apple slices ready to be rolled into rose buds BEFORE pouring the ganache over the cake or cupcakes. If you wait too long, the ganache will start to harden, making it difficult to press the rose buds into it. 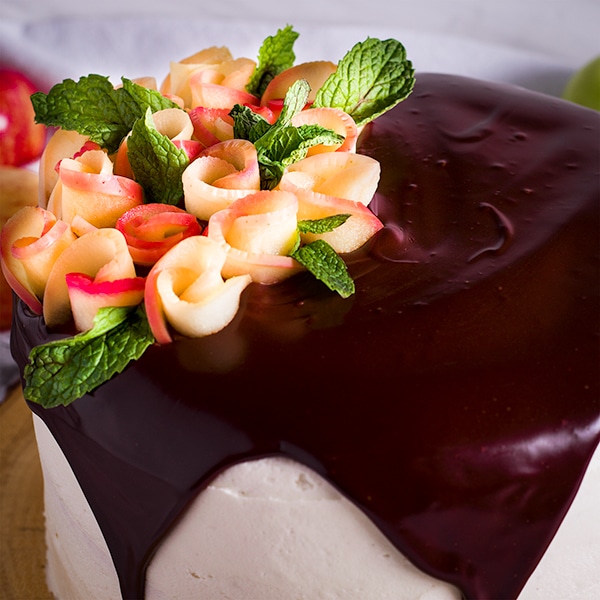 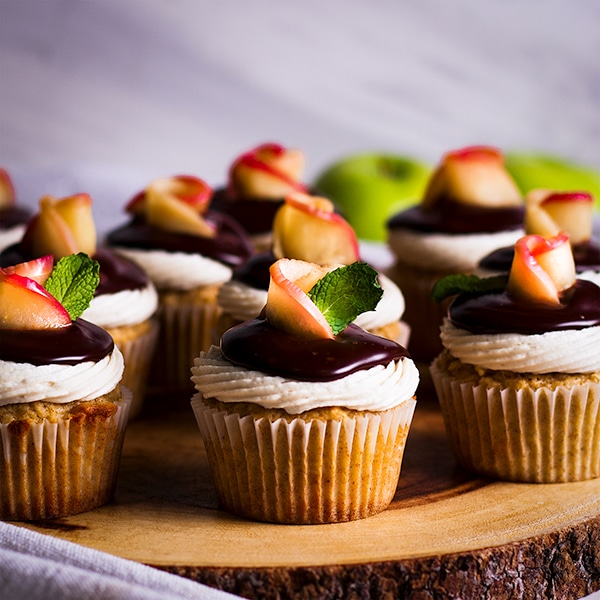 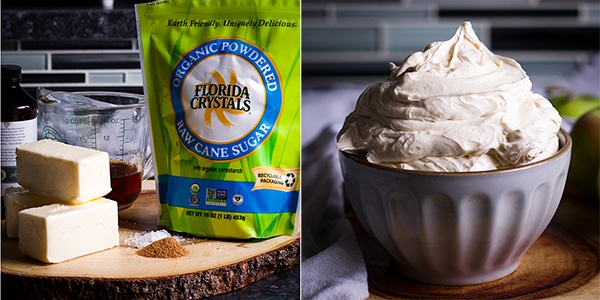 By posting this recipe I am entering a recipe contest sponsored by Florida Crystals and am eligible to win prizes associated with the contest. While I was not compensated for my time, I did receive free product samples. As always, all opinions are my own.

This Apple cake is absolutely bursting with warm apple flavor thanks to concentrated Apple Cider Syrup, shredded sour apples, and a touch of cinnamon, nutmeg, and allspice. Apple Cider Buttercream delivers even more apple flavor and a thick, velvety layer of Dark Chocolate Ganache covers the cake with a blanket of bittersweet luxury.

For the Apple Cake:

For the Apple Cider Buttercream:

For the Chocolate Ganache:

For the Apple Roses (optional, for decoration):

To Make the Apple Cider Buttercream:

(*See notes below about preparing the cake and buttercream in advance.)

For the Chocolate Ganache:

To make the Apple Roses:

*See the photos and step-by-step instructions with photos above this recipe.

The cake can be kept at room temperature for a few hours until ready to serve. *See notes below on storage and make-ahead instructions. 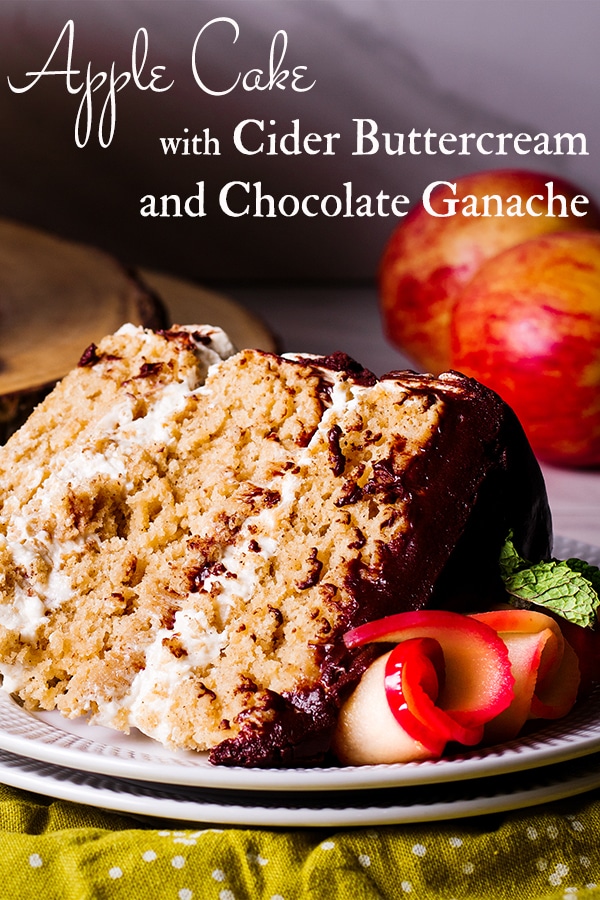 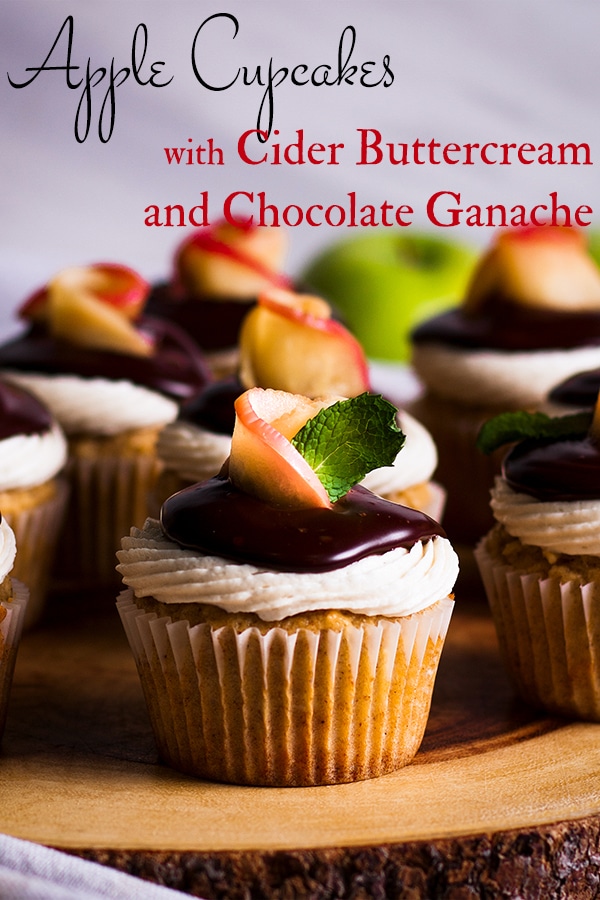